First off, let me start this tiny yet overwhelming fraction of my life by acknowledging the visionary Andrea Paoletti for giving birth to Casa Netural, a co-working space set in Matera, Italy’s southern rural environment. Actually I don’t recall any other initiative as such, one that articulates an urban need into the wild by spreading dynamics of collaboration, reciprocity and inspiration. The idea is excellent, especially for a region suffering from youth migration where local development is key for the present and future of its territory.
My involvement in this project came through an initiative called Co-Living. 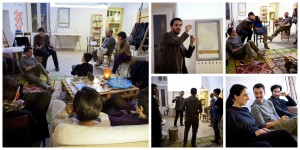 It is a parallel project consisting in living at Casa Netural for one week in order to organically foster the exchange of experiences, practices and projects. Having selected 10 outsiders and bringing them one-by-one to meet the community has expanded the dialogue from local to global.
Another particularly interesting concept is Exploring Basilicata. Benefiting from the presence of co-living participants and the need to explore the region, on the weekend we went on a 48 hour sightseeing roadtrip, not only on the lookout for beautiful landscapes, but for adventures —we have now baptized Extreme Basilicata—, and most importantly, visiting stimulating alternative projects from the region. Thus the community is now able to map out a network of local/regional heroes.

To describe Co-Living adequately, imagine a community that embraces every newcomer, listens and asks questions always with a big smile on their faces. Believe it or not, it is what future Co-Living participants will find in Matera. I still haven’t figured out if this proximity is due to habits from rural contexts, to the curious community built around Casa Netural and/or that it actually has a relation with the city’s humble history that has strengthened its social tissue… People listened —despite my so called italian— to what I had to share, they invited me to their ancient-from-the-outside-yet-modern-on-the-inside homes, cooked amazing local dishes that nurtured long insightful conversations about the town and the territory.
It was part of my personal goals to have an objective perspective as I would be able to impartially understand the specific context of Matera. But to be brutally honest: I failed. Not only was a week not enough to have a general overview and profound comprehension of the territory. Also I was constantly bombed by information at all levels. Tourist level, as I had never seen such landscapes; at Casa Netural level as I had to discern the dynamics of a rural co-working space; at Matera/Basilicata level trying to identify what belonged to the past, present and future.

My advice to future Co-Living participants is that if you want to have a concrete output from the week in Matera: choose your topic and work on it before you go on site. Only then will you make the most out of it, productivity wise of course. And my advice to Casa Netural: the community could figure out what are the most important projects to work on locally so that, either Co-Living participants can develop one at the time bringing a certain continuity between them or each participant chooses amongst the possible projects which resonates most with themselves.

On a completely different note, one of the first things that struck me was the fact everyone kept on talking about bandi, which at first I thought it had to do with music bands. Little did I know bandi means “competitions”. And when combined with the impressive data: 85% of the Basilicata workforce comes from the public sector ­­—unless there is an elephant in the room that I haven’t seen­­— this territory is highly subsidised, just like developing country receiving donations from the wealthy families.

> How might Basilicata become self-sustainable using its own resources?

It’s not as if it was an impossible mission, in fact I perceived the willingness of doing things and doing them differently. Take Tommaso as an example, a cool guy that studied 1 year abroad and quickly became homesick. Now that he’s back in Matera, you’ll find him always on the lookout for alternative plans in the city. Like him I met a community of interesting and curious people, which means there is a real demand for diverse thinking projects. Besides, with internet more and more people are getting connected to information coming from all over the world, awakening needs that might just come from urban/cosmopolitan contexts. Even if it sounds crazy or scary or both, I did recognise the same hipster adolescents you find in big cities such as Madrid, taking the train from Bari where they study back to their villages where they live.

> Are we creating globalised world citizens with similar needs disregarding context of origin?

In final, Basilicata is an effervescent territory with lots of multiple flavoured bubbles emerging. On the one hand, it is an excellent way to attract entrepreneurs back to the rural regions, but on the other hand, there is a latent need for a territorial strategy, common objectives that will consolidate the path and canalise energies, only then will initiatives be coherent. If not, it might end up with weird experiments of all sorts that I personally don’t want to see.
Maybe an open innovation platform where citizens share their experiences on what has been DONE in Basilicata (cf. Open IDEO) could come in handy. This is one way to learn from each others mistakes and evolute in an efficient collaborative way.

I am most grateful to Casa Netural’s community, to Laura Sañudo for taking good care of me, and to Andrea – without him this would have never happen.